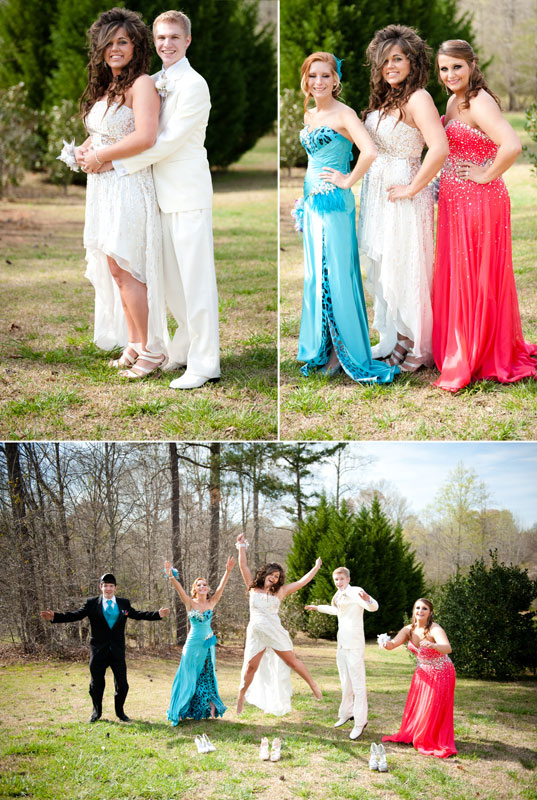 "Ever since I was in middle school, I had always wondered what Prom would be like. I always had the questions like, 'Is it really a magical night like movies portray it to be, or do people really stand against the wall to wait for a gentleman to ask them to dance?' I had so many questions.

"My junior year came around and it was time to decide whether or not I was going to attend prom. At the time, I had been dating a handsome man for almost half a year. His name was Austin and we lived in different counties, therefore we went to different high schools. Since we had only been dating for 6 months, I didn’t want to make him feel uncomfortable at my prom, so, and I decided to wait and do something with a smaller group of friends. We decided to go to Stone Mountain near Atlanta on the night of prom, and then have a nice dinner at The Cheesecake Factory. I had such a wonderful evening celebrating, however, I couldn’t stop thinking about the experience of prom. When I got on social media websites I saw all the photos from prom that night. I saw people that I knew transform into Gods and Godesses. They looked so happy, and I promised myself that no matter what the situation was, I was going to my senior prom.

"November of my senior year: I started seeing some posters and announcements about the upcoming prom. Immediately I started to get excited. I was still with Austin, and we were as happy as could be. We both decided to go to prom. Even though he was going to my high school’s prom, he still felt the need to ask me to attend my own prom. I included a picture only because this moment meant so much to me. I had been waiting so long to get asked to prom, and it was very exciting. He took me to a very nice restaurant, and when I was looking at the menu, he showed the waitress something on his phone. The waitress laughed and said “I don’t think we serve that here.” I was confused and asked him what he showed her and it was just a photo of a lobster. So I laughed it off and thought nothing more of it. At the end of the meal the waitress comes out with dessert, and on the plate, it had “Prom?” drizzled in caramel. That moment was so sweet to me. Yeah he didn’t go all out like some guys do, but that isn’t how our relationship is. We are comfortable with one another and we both enjoy the small things. So of course I said yes, and then the planning started.

"For months I was constantly online looking at different styles of dresses, different brands, and everything. As you can recall, I had never been to a prom, I wasn’t sure what I would like. And on top of that, I had to keep in mind that Austin’s outfit would have to complement my dress. So eventually I stopped looking online and just decided I was going to shop for a dress and hope for the best. So during Winter break at our school, my family and I flew up to Pennsylvania to visit my dad’s side of the family. His family lived in a small town, but there were quite a few shops along the strips. My mom decided to ask my dad’s grandmother (my great grandmother) to go shopping with us to find a prom dress. We go into the closest shop first. I walk in and immediately saw this gorgeous dress, I run up to it, admire it and decide to try it on. However, the shop did not have the price tags on the dresses. So I was unaware of the price tag for the dress. I loved it so much and asked the price… Let’s just say, there was no way we could afford the dress, and that was one of the “cheap” dresses. My grandmother explained to me that they could overcharge on the dress because it was such a small town and the town residents don’t mind overpaying because the next dress store was a 2 and 1/2 hour drive. I was heartbroken. The dress was beautiful and unique. It was just my style ... I’m not the kind of person to get a negative attitude, but I was very upset about the circumstance. We decided to leave the shop and call it quits on dress shopping there.

"That dress was the very first prom dress I had ever tried on, so of course, it was constantly in the back of my mind...

"When we returned back to Georgia, there was two months left until prom, so my mother decided to take me to a dress shop that wasn’t to far from where we lived. I was really nervous to go dress shopping again...

"When we arrived at the shop, we were there 15 minutes before they even opened. My mom decided to go sit on a bench near the street, and I decided to stare at all the dresses in the window display. I was excited, there were so many different styles, patterns and colors! A few minutes pass by and I’m in the process of making a checklist in my head of what dresses I was going to try on. A lady came up to the door and unlocked it early and greeted me. She was very bubbly and joyful. She said that since I was the first and only customer at the moment that I could try on as much as I wanted and she could help me carry the dresses and change, etc. She was great, the experience was amazing. I remember the first dress I tried on, it was a mermaid style dress ... I did not like how tight it was around my legs. Immediately that knocked off a few dresses that I planned to try on. Then I tried on a colorful dress, and I didn’t like that either because I am more of a neutral colored person. I like simple tones. Automatically the dresses became very limited...

"I was beginning to think we should just leave and forget about it, again. But something caught my eye as I was heading towards the back of the store to put my shoes back on. Some dress was shining in the light, but I couldn’t see the full dress because it was crammed in with other dresses.  I asked the lady if it was okay if I pulled the dress out, and she said 'Of course!' My jaw dropped when I pulled out the dress ... it was the same exact dress that I tried on in Pennsylvania!!!

"My heart was beating so fast, I couldn’t believe my eyes. I gasped and called my mom over to me. She couldn’t believe it either. Then I thought about the size, I was afraid to look because the certain shop that we were in didn’t carry the same dresses in all different sizes. I looked at the tag and it was the perfect size!!!! I skipped to the dressing room and put it on. I fell in love all over again. How could it be? Then came the tough question…how much is the dream dress?

"The dress was HALF the price that it was in Pennsylvania! Plus, the lady would include a pair of earrings and shoes of my choice for only $40.00 more. She went to the back of the store and pulled out the prettiest heels. The heels looked beautiful with the dress and then there was earrings that looked stunning as well. We could easily afford the dress now!

"I cannot explain to you the amount of excitement I had!!! However, I had to think about Austin and what he would wear ... and the lady came to my rescue again. She said we could match up my dress right then and there with an ivory tux. Then we matched the beads on a dress to a tie that they had. (You see, I didn’t want Austin to see my dress until the night of prom). He didn’t care what he had to wear, as long as I was happy. We bought the dress, along with the accessories. I promise you that I could not stop smiling. I was ready for prom now. What amazing customer service!

"I got the dream dress ... the very first one I ever tried on ... what are the odds? My excitement only grew as prom approached. I wanted to look beautiful that night, and I knew that I would.

"The morning of prom I was wide awake and pulled out my dress, excited as ever. As the hours passed by, I got my hair curled and makeup on by a stylist. But I’m the type of person that I like to style my own hair. I had been wearing ProExtensions WAY before prom and a lot of stylists in my area don’t have experience with clip-ins. But that was fine, I love doing my hair and being creative ... so I decided to go big with my hair style and achieve the texas look.

"The extensions blended beautifully as I pulled my hair back into bobby pins. I really felt like a princess when I got fully dressed. Austin and a lot of my friends were already outside of my house because they were meeting at my house for the photographer. So I go out the back door and walk up the driveway and I see Austin. He glanced at me (he was in the middle of a conversation) then he looked back at me and his first words were 'Oh my gosh ... wow ... You look like an angel.' Then everyone else turned towards me and agreed with his statement.

"I truly had a one of a kind dress. No one else at prom had a high-low dress like mine. And the beads and colors were great in the light. To top it off, Austin was the only guy at prom to pull off an ivory tux. We matched flawlessly.

"I don’t have to tell you how prom went, because you already know it was a success. My question was finally answered ... it WAS a magical night.

"I have now finished my freshman year in college, but I still remember that experience. I don’t understand how perfect it was ... I loved prom. I suggest that everyone give it a try at least once. I am so glad I promised myself to go.

"Me and Austin have now been together over 2 and 1/2 years and we are still as happy as can be. I will never forget my dress, my cinderella dress. I hope you have enjoyed my story, because I truly enjoyed reminiscing on it and its so refreshing to share my joy!!!"

You have no items in your shopping cart.